You are in: Home Customized designs Do you know the difference between a pinafore and an apron?

Do you know the difference between a pinafore and an apron?

Certainly, a pinafore and an apron are two very common items of clothing in our day-to-day lives, whether for our own use at home or at work. 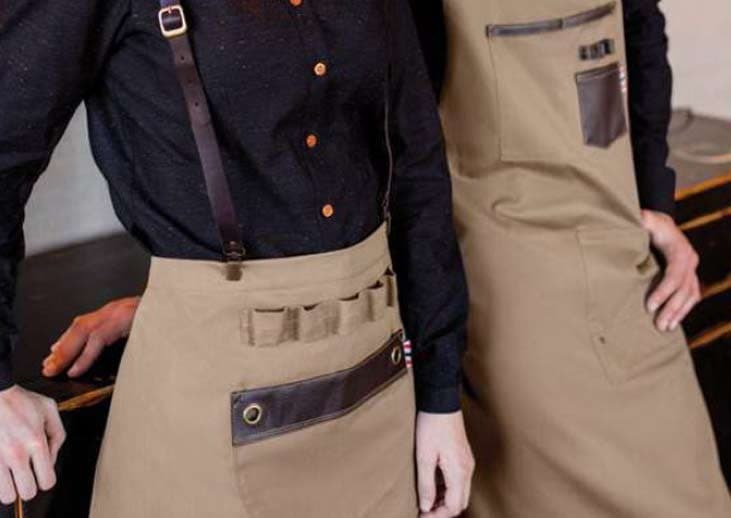 However, are you sure you know the difference between them? They are often referred to equally, so if you want to find out more about their particularities, read on!

What is a pinafore? Origin and evolution

The pinafore, from the Latin mantele (canvas’ fabric), can be defined as a "garment with a bib that is hung around the neck and tied at the waist. Its purpose is to protect “the wearer's clothing" and its origin dates back at least 5.000 years.

For what purpose is the pinafore used?

It seems to have been in use since the 2nd century BC, when it was frequently seen in jewish ceremonies and during sacrifices. This was due to the fact that, by covering the priests' garments, it prevented them from suffering any kind of stain or splash. The sumerians and egyptians also came to use it at meals and banquets to avoid soiling their clothes.

In Spain during the 14th century, we can find references to its use in aragonese inventories of this period: a pinafore around the leyto; another pinafore for banyo.

It is very commonly used in regional costumes, as it was very common for village women to wear them for all kinds of occasions. In addition, it was also used during butchering, washing and housework. Men also wore a pinafore crossed at the back to carry out certain jobs and professions, such as a glazier or miller, which could cause damage not only to their clothes but also to their bodies. For this reason, the garment in this case had to cover from the chest to below the waist, and be made of a strong material.

So, what is an apron?

Its beginnings and evolution are closely linked to those of the pinafore, in fact, it can be considered a variant of the same garment. It thus shares its origins in jewish ceremonies and even in the world of shepherding, where it was common to put one on the male to prevent the females from being impregnated. In the 15th century it was called avantal and, in his Universal vocabulary, Alonso de Palencia refers to them by saying that "they are placed on the table... with which the warrior cleans himself... and in the vulgar language they are called tobaja".

Also in the 17th century, Sebastián de Covarrubias mentions that "it is a levantal that the service women put in front of the table for not to dirty their skirts. It comes from a blanket or mantle, because it covers, quasi mantil".

So, what does apron mean? In this case, it could be defined as "a garment, with or without bib, which is tied around the waist and is used to protect clothing in domestic or professional tasks".

But what is the difference between them?

Although, as we have already mentioned, both garments are so closely related that they share their origin, today there are two fundamental differences between them.

Characteristics of the traditional pinafore

In our work pinafore section, we can find a wide variety of models specifically designed for different work contexts. Thus, they are associated with artisanal professions such as solder, carpenter, mechanic or shoemaker.

Characteristics of the apron

The history of grandma's apron

The apron is a garment much more closely linked to the home than the pinafore, used as a protective element in certain professions. For this reason, when we think about an apron, we often inevitably associate it with our mothers or grandmothers.

This is what Angeles Fuentes was also thinking about when she wrote "El delantal de la abuela” (“grandma’s apron”), a text that went viral on social networks and which accompanies the image of a huge graffiti located at “Jerez de la Frontera”. In this particular tribute to all our grandmothers, Fuentes makes apron visible as a sign of identity present throughout their lives: they used it both to remove the pan from the oven and to carry the eggs from the henhouse.

Undoubtedly, the difference between a pinafore and an apron lies not only in the materials they are made of and their different shapes, but also in their different uses and, sometimes, the connotations they have acquired throughout history.